Read more about Taryn below, or click HERE to read her full story.

I found Kua Sky online when I was looking to get a new jumpsuit. I had just been fit/sized for a custom suit with another company and was literally one click away from spending over $800 on their jumpsuit. I started looking for other companies and came across Kua Sky. I decided to go with them instead since I could get my suit and start jumping it way sooner. The price was more affordable, and the quality of the materials they use are superb. What I love most about Kua Sky though is the people. The first time I met Chris and Wendy and some of the other ambassadors, I instantly felt at home and as if I had known them forever. I love getting to represent such an amazing brand, and love the story behind Kua Sky. 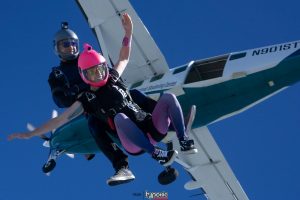 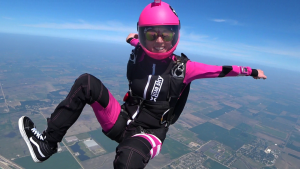 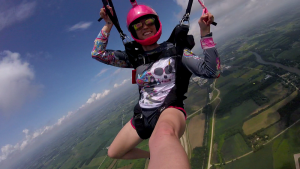 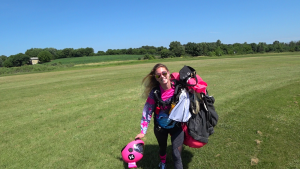 I LOVE both of my jumpsuits! I have the pink suit and then also a custom one that has fleece lining in it and is especially perfect when jumping in the winter in Wisconsin!

Getting to Know Ivan:

Born and raised in southern Indiana. I even went to college in my hometown to become a pilot. I was working on finishing up flight instructor ratings when I found out I had a rare lung disease due to a freak accident during my junior year of college. After surgery and being in the hospital I was told I was not allowed to be a pilot anymore as I couldn’t obtain a flight medical with my disease. For me I felt like my life was over since I was no longer allowed to do the only thing I truly cared about and had worked so hard to pursue. I graduated with an aviation degree and moved to Wisconsin to work for an airline to hire and train pilots. I was thankful I was still able to get a job I liked in aviation even though I couldn’t fly. However, I always felt like something was still missing. That is, until I went skydiving. Skydiving has been my way to fly again and honestly has given me the peace knowing I can’t pilot planes but instead pilot my body.

I began skydiving in August of 2017 and started by doing 2 tandems within 6 days of each other. After the 2nd one I met my now fiance and jump partner for life, Bob, who had just came back from a jump with friends. He told me there was an AFF class that Friday and I should come check it out. I took a day off work so I could go learn to skydive, and also partially to just see the hot guy who had told me to come skydive! After that I was hooked and knew this was something I wanted to do passionately. I got licensed on the last load for the season in October 2017 (nothing like cutting it close), and kicked off 2018 by jumping with Bob as much as I could to learn everything he had to teach me. Through skydiving I have made so many new friendships with people that I now consider family. I plan to start traveling more for skydiving and jumping at as many dz’s as possible. When not skydiving and working at the airport, I love doing anything outdoors. I’m an avid bow hunter in Wisconsin and love going deer and turkey hunting, and also ice fishing in the winter. Hiking/camping is another activity I love to do and Bob and I did a 4 day hike up Machu Picchu in Peru where we got engaged! Also, fun fact my cats name is Pilot.

Create an Account
Start typing to see products you are looking for.
0 items Cart
My account
Home